The image and description are courtesy of Wikipedia.

Heavy Rain is an interactive action-adventure psychological thriller video game created by French developer Quantic Dream exclusively for the PlayStation 3. The game is written and directed by Quantic Dream’s founder and CEO David Cage. Heavy Rain‘s story is a dramatic thriller modelled after film noir, featuring four protagonists involved with the mystery of the Origami Killer, a serial killer who uses extended periods of rainfall to drown his victims.

Ethan Mars is trying to save his son from being the next victim, while investigative journalist Madison Paige, FBI profiler Norman Jayden, and private detective Scott Shelby are each trying to track down clues to the Origami Killer’s identity. The player interacts with the game by performing actions highlighted on screen related to motions on the controller, and in some cases, performing a series of quick time events during fast-paced action sequences. The player’s decisions and actions during the game will affect the narrative. The main characters can be killed, and certain actions may lead to different scenes and endings.

Now this game was totally not what I expected. It was a Christmas gift from my son, who thought it was a ‘shoot-em-up’ game. He knows I enjoy that type of game and he told me that’s what he got me. So when I started playing that’s what I thought I was going to be doing. You know, shooting everything that moved, as well as the normal things that don’t move. In other words, shooting everything and anything!

But it’s not a ‘shoot-em-up’ game. It’s an interactive movie. That’s the best way I can explain it. At first I was thinking get on with the shooting but then I was drawn into the storyline and settled back and…well, I interacted.

Strangely, I was captivated. It’s like I (the player) was the director and I made the decisions on how the characters would react and what questions they would ask. I could have (and did) make some of the characters do good things and some, well, not so good. The decisions I made had an effect on the outcome of the story. The main characters can die if you can’t get them through certain scenarios and you gather less clues if you’re slow in responding too.

I literally spend hours at a time watching and playing as the storyline unfolded. I found myself eager to return to the ‘game’ whenever I turned it off. I wanted to know what would happen next. I wanted to solve the murders and work out who the murderer was. And, when the story ended, I was pleased to discover that if I play again and make different decisions then the ending will be different.

This is not a fast-paced game with earth shattering explosions every second of play. It’s a well thought out game that will have you totally focused on what’s happening on the scene. It’s a brilliant game that I wouldn’t have purchased for myself if I had read the reviews for it first. But it’s a game I’m certainly glad I’ve had the opportunity to participate with and enjoy.

I recommend this game.

I’ve played the Playstation since they were first invented. I currently own PS1 and about 100 games, PS2 and about 200 games and PS3 and about 30 games (and counting). A couple of decades ago, we owned a Nintendo as well.

Most people give me a strange look when I say I play PS3 (or whatever console I might be using at the time). Few of them say it, but most of them think to themselves “she’s too old”. Well, I’m not too old and I never will be. I love playing games. Especially gory, blood-thirsty ones such as Resident Evil (Resident Evil 2 and 3 for PS1 are still my favourites). Yet I’ll also play war games, kids games, puzzle games, shooter games, whatever I can get my hands on except sports (hate them with a passion).

Every now and again I’ll write a review for the latest game I’ve completed. Today, I want to write about Uncharted 3: Drake’s Deception.

I received this game for Christmas and was excited as I own and have completed the first two games. And thoroughly enjoyed them both I might add.

Briefly, the plot follows Drake and Sully (and a few friends) as they travel the world trying to solve a puzzle concerning a lost ancient city and the treasures they believe they will find there. Of course, the baddies in the story also know of this lost city and want something other than the treasures for themselves, but it takes Drake and Sully a long time to work this out and death and unnecessary risks are not out of the question when you want something bad enough.

This is an adventure story which kept my attention and had me coming back for more. I highly recommend it.

The storyline for this game is superb. In fact, I’d go as far as to say that it felt like an interactive movie … with me controlling events, to a certain degree. The graphics are amazing. The game itself is addictive. There are four levels of play – super easy, easy, normal and hard. There are puzzles that were easy to solve and some that I found impossible to solve, however the game seems to know you’re having problems and will offer hints after a certain amount of time or after several failed attempts. I was thankful for that at times and ignored the hint prompt if I didn’t want help.

Originally posted on another site on 5 January 2010. 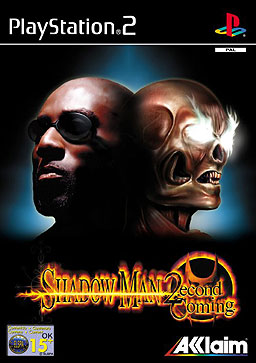 As I’m on holiday for a couple of weeks, I generally play video games on a regular basis – most days, in fact. This holiday season, I chose to play Shadow Man: 2econd Coming, which is a game I started once before but never actually finished.

On Saturday (which is when I finished the game), I discovered that I was very close to the end last time I played and it makes me wonder why I didn’t carry on. Perhaps I couldn’t find an essential item. Or maybe work resumed and time became an issue again. I don’t know what the reason was, I’m just glad to be able to report that this time I did finish it.

This game, for me, was extremely difficult in places. I sometimes spent an hour or so attempting one small manoeuvre over and over again. It was frustrating beyond words and I’m ashamed to say that my puppy may have learned that his mummy gets very cranky when she can’t do something almost instantly.

My partner sat watching me play for a while, on several occasions, and he tells me that no matter how frustrating the game might have been for me, it didn’t compare to how frustrated he felt just watching me.

“Oh, have I checked this corner,” he mimicked in a high voice that sounds nothing like me. “Oh, that’s right, I did, but I better check it again…and again…and again.” And then in his own voice, he added, “Just shoot the bastards and move on!”

He’s exaggerating, of course, I don’t check the same corner three times…unless I’m lost and don’t realise I’ve checked the corner three times already. And I can’t help checking every corner of every room. I cut my teeth (well, now I’m exaggerating a bit) on Resident Evil and in that game you have to check every inch of every room otherwise you miss something important. That’s been breed into me and I can’t help myself.

Pushing the frustration aside, this is a brilliant game. The graphics aren’t as great as they are these days, but who cares when you’re having fun?! Besides, back in its day they were pretty impressive. Just goes to show how far we’ve come in eight years.

Yes, the game is on PS2, but don’t let a small thing like that stop you from enjoying a great game. Get yourself a console and the game and get started on it today. You won’t be disappointed. I highly recommend this game.