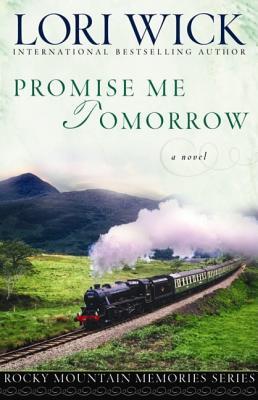 I actually finished reading Promise Me Tomorrow by Lori Wick almost three weeks ago. Life has been busy, which has stopped me from posting.

Promise Me Tomorrow is a romance story written by a Christian writer. The religious parts of the story were not too bad, generally speaking. The characters and actual story held me through most of those scenes. There was only one scene that was too much for me, which I skipped altogether. Apart from that it’s a romantic story about a man and woman and the obstacles they must overcome to be together. It’s sweet, sloppy and totally predictable, but I loved it.

I feel shy in admitting this, but it’s a story that could easily have been written by me (except for the religious content), because it’s exactly what I used to write when I first started writing. I adore reading and writing about the attraction between two people. You know what I mean…the sly glances, the adoration in the eyes, the fluster, the touch and the wanting to see the person again. And when I first started to write, I would build entire stories around these tender moments.

Anyway, it’s been a while since I read a book that I couldn’t put down. I honestly think this book spoke to me because I have denied (openly and privately) my desire to write the type of story I really enjoy to read and write. OK, I know that a lot of people would read this book, or any number of other books similar to it, and think it is complete dribble, but I don’t care anymore. I’m tired of doing what other people expect of me. Maybe I’ll enjoy writing again, if I do what I want to do. This is totally my own fault, by the way. I’ve allowed general consensus to rule me. But no more!

Promise Me Tomorrow is recommended to those with a tender heart.

2 thoughts on “Promise Me Tomorrow”