Last weekend I was in the library and a book jumped off the shelf and slapped me in the face. The cover of For One More Day by Mitch Albom is as plain as they come. In fact, if the book had been named anything else I think I would have thrown the book back onto the shelf and kept walking. But the title of the book grabbed my attention immediately.

For One More Day 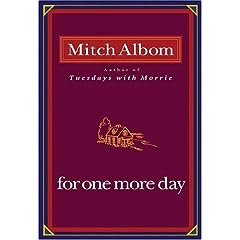 Being a bereaved mother, the title spoke to me in volumes. Without reading anything more than those four words, I knew I wanted to read the book. And I didn’t read the blurb or the inside cover, I just borrowed the book and brought it home with me. And my gut instinct was right.

During the week, I picked up the book again and this time I read the blurb on the back:

“If you had the chance, just one chance, to go back and fix what you did wrong in life, would you take it? And if you did, would you be big enough to stand it? Mitch Albom, in this new book once again demonstrates why he is one of my favourite writers: a fearless explorer of the wishful and magical, he is also a devout believer in the power of love. For One More Day will make you smile. It will make you wistful. It will make you blink back tears of nostalgia. But most of all, it will make you believe in the eternal power of a mother’s love.”

James McBride, author of The Color of Water: A Black Man’s Tribute to His White Mother

As children, we often think our parents are wrong. We don’t understand why they refuse to let us do the things we want to do. We often are embarrassed by them, shy away from them and say things that hurt them. As children, we just don’t get what it’s like to be a parent.

If you are a parent now, can you imagine what it would be like to be given the chance to go back and right a wrong with our mother…especially if that mother is dead?

This story is written is a way where the words seem to be written especially for you. It felt so private and so close to reality that it had me in tears. If I knew then (when I was growing up) what I know now, life would have been so much easier. I could have saved myself a lot of heartache if I had listened to my parents, but as life is not meant to be easy, we stumble through the years making mistakes. These mistakes make us the people we are today, but what if…

Every family has its secrets. Some children never learn the reason for important decisions made, such as divorce. If we had the chance to go back and spend a day with a lost relative, what would we learn from that time? What would we say?

This book affected me because it was written about a mother and son. The fact that the son wanted to kill himself added to my desire to read the book (although it isn’t in any way a main focus of the story). It gives clear reasons why someone with everything can lose focus to such an extent that it can ultimately lead to the lack of will to live. On the other hand, it shows why a family can become dysfunctional and how easily wrong ideas are formulated because people are not told the truth.

I highly recommend For One More Day to anyone with a heart. You will not regret the time spent within this world, reading the words and sharing the insights this story has to offer.